Across the South, polls show Republicans ahead before Tuesday's elections 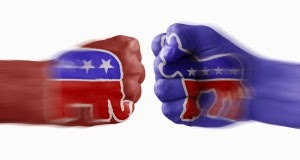 Across the South, polls show Republicans ahead before Tuesday's elections


Though Mary Landrieu is expected to get more votes than either of her two main Republican challengers in Tuesday's election, an NBC News / Marist Poll conducted Friday shows the Democratic incumbent losing in a head-to-head match-up with Bill Cassidy and losing in an head-to-head to match-up with Rob Maness.

I think a poll showing her trailing Maness illustrates that.  He's never been elected to office, doesn't have a political record to offer and doesn't have the name recognition that Landrieu has. But he has an R beside his name, and I think we've reached the point in Louisiana where an R beside a name is enough to win against against a candidate whose name runs beside a D.

Such a shift suggests their belief that the D is now deadly.
Posted by Louisiana Conservative Alliance at 7:52 AM