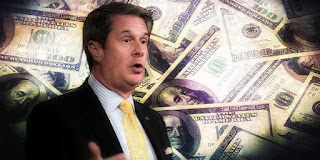 Kennedy says he told Ruckert that Vitter should consider not even running for governor if the senator’s numbers keep slipping among his core constituencies — Republicans, Evangelicals and seniors.

Perhaps that’s what caused such a caustic response from Team Vitter.

“The difficulty for Vitter is those are his core groups,” Kennedy said. “They are producing most of his support. So if he’s falling there, it’s not good for him. In meeting with his staff and going over it, I did raise one question that got them very tense. Basically, looking through the crosstabs and the numbers, I said my advice is free, but I would recommend that Vitter do a survey about a week before qualifying to see where he is. Because if the trend continues — and I’m not saying it will — but if it continues he could catch himself in a situation where he can’t make the runoff. If that happens, his political career is over. That made them very uneasy, but I was just trying to give them good political advice.”

Kennedy said a significant number of Vitter’s “soft” supporters among Republicans, Evangelicals and seniors have come to view Angelle as a viable alternative.

“Vitter’s soft support is falling back. One of the telling things in my crosstabs involves a Vitter-Edwards runoff question. Among white voters, if you look at how individuals voted in the primary ballot question, when you ask those who voted for Angelle how they’ll vote in the runoff [between Vitter and Edwards], only 51% say ‘Vitter.’ Among Dardenne supporters, only 34% said they would vote for Vitter. … That tells me a lot — that he can’t get the votes [he needs] from his fellow Republicans.
Posted by Louisiana Conservative Alliance at 8:25 AM