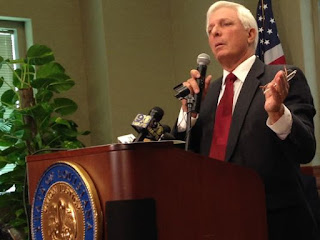 Taking a position at odds with the state party, the largest parish Republican organization on Tuesday will announce it is backing Buddy Caldwell’s re-election bid for state attorney general.

Jenkins pointed out that while still a Democrat, Caldwell filed a lawsuit in March 2010 to block the federal Affordable Care Act, known as Obamacare. Caldwell said at the time: “This is not a partisan issue. It’s about what is best for the state of Louisiana and its people. This act is an unprecedented intrusion on state sovereignty and individual freedom.”

Caldwell also joined Texas’ successful challenge to President Barack Obama’s executive order on amnesty for illegal immigrants and filed one of the few successful lawsuits arguing for the validity of the state constitutional bans on same-sex marriage.


“Marriage is between one man and one woman, period,” Caldwell answered on a questionnaire submitted to the parish party.

But in the last two statewide elections, more Baton Rouge Republicans turned out to vote than any other single parish in the state.

“I am humbled and delighted to receive the endorsement,” Caldwell said in a prepared statement. “I am very pleased to see that the Republican Party of East Baton Rouge Parish took into account experience and qualifications in making its endorsement for attorney general.”
Posted by Louisiana Conservative Alliance at 8:27 AM