Attacks in the Louisiana governor’s race 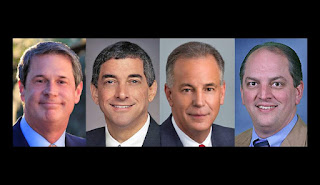 Attacks in the Louisiana governor’s race

In the race for governor, U.S. Sen. David Vitter will face questions and criticism about his prostitution scandal. Lt. Gov. Jay Dardenne and state Rep. John Bel Edwards promise as  much.
Just in time for the 10th anniversary of Hurricanes Katrina and Rita, the Louisiana governor's race looks to be a perfect storm that strikes in late August and all of September. The outer bands are already upon us.
Early frontrunner U.S. Sen. David Vitter is running true to form — attacking straw-man opponents. When a statewide poll by Verne Kennedy showed the senator slipping among his core constituencies (evangelicals, Republicans and seniors), Vitter's campaign staff broadsided the pollster.
#lagov

Posted by Louisiana Conservative Alliance at 7:46 AM