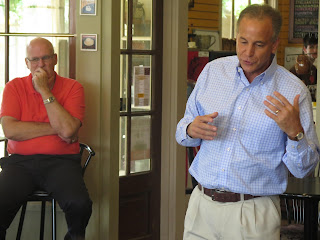 Angelle said he’s got the best job he ever wanted — husband to his wife, Dianne, and father to his five children, all of whom grew up in Breaux Bridge. Even when he served in Baton Rouge, he lived in his hometown.

But as governor, he said, he’s got goals he wants to promote — among them, to ensure workforce training is available that will help match up the state’s unemployed or underemployed with the influx of good jobs now available and unfilled in Louisiana. That, he said, is a passion because he’s seen the need not only in Breaux Bridge, but around the state.

He said wants the state to shore up its finances, to improve its roads, to be fair in taxation.

(Senator Fred) Mills said Angelle will deliver what he promises.

“People gravitate to a leader like that,” he said.